Work It Harder Make It Better
Do It Faster, Makes Us stronger
More Than Ever Hour After
Our Work Is Never Over
~Daft Punk: Harder, Better, Faster, Stronger

Next week is my two year anniversary. Two years ago I was arguably in the best shape of my life. I was lean, I was narrow, I was fast and I was strong. Sure I was neurotic and working out incessantly to fill the large hole in my heart that had been ripped open during my breakup with Jason…but physically I was amazing!

CrossFit had become a serious component of my life and I was exhilarated by the changes I saw in myself. Coupled with my running and cycling, and well, the workouts more than negated my drinking habit. But seriously, I loved CrossFit. Three nights a week I would run the 1/2 mile to the box, meet up with gorgeous friends, and push my body beyond limits it didn’t know it had.

Then it happened. Then IT happened. During a beautiful Saturday morning WOD, (it was the day of the Christmas parade because I remember the horses pre-positioned in front of the box), it happened. Thrusters, farmer’s walk, and pull-ups, OH MY. Somewhere in the second or third round I felt a pop in my neck. My vision blacked for a few seconds and I stopped. Then I went at the pull-up bar again. One more POP and this time my vision darkened longer and the pain was unbearable. I stopped. From there I don’t actually remember much else.

For weeks the blackness would creep up on the outskirts. I couldn’t turn to the left and any physical activity would shoot spikes of riveting pain into my skull and down my arm and back. Weeks became months.

Six months of physical therapy allowed cycling. Cycling begot running and bootcamp. Then the latter disappeared upon my moving to Wilmington and I again felt physically lost and angry.

Suck it up buttercup. Ten months of personal training 3-5 times a week provided the strength to reconsider and the desire for more. Every session of sore muscles retaught me form, balance, and perseverance. I’m told I have an uncanny ability to recover.

My husband was the final piece. He provided the confidence and push for me to step back into a box. He reminded me that scaling is not weakness; rather it is simply my reality. The physical pain I feel in my neck every day is just a reminder of what I can still do with my arms, my legs, my core. It’s been two years since I broke myself. It’s now been one week since I started back at CrossFit. This is a better anniversary to remember. 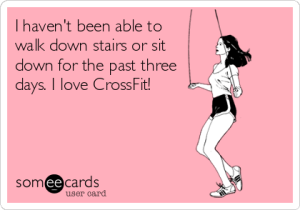